It was a pitch-black night after three very rough days of being offshore. We were nearing our harbor and being very careful to ensure we gave the entrance point plenty of clearance. Normally we try to avoid entering unknown harbors at night, but the entrance was straightforward and half the Baja Ha-Ha boats were already there providing a good idea of where to anchor. Suddenly a loud alarm started blaring and a red light flashed to my port. I immediately turned away from the land/light while Paula went down to check on where the alarm was coming from. My initial thoughts were that someone was trying to warn us of a hazard, and it was quite unnerving in the inky blackness to not understand what was going on. P silenced the alarm—it was a distress signal coming from the VHF radio. Whew! At least we knew it wasn’t something we had triggered. The alarm blared again, this time with a “Mayday” call. It was garbled, but something about “we’ve gone aground.” Then, silence.

The distress signal automatically transmitted coordinates so we were able to plot it and see that the signal had, in fact, originated where I saw the red flash, probably a flare. The radio was filled with chatter with the rest of the fleet trying to make sense of what was showing up on their systems. Since we were closest to the transmitted coordinates, we became the de facto “on scene commander” and headed toward the location. For the next several hours we circled off shore scanning the darkness for indications of signal lights, wreckage or survivors in the water, relaying radio transmissions and being careful not to put ourselves in the same predicament—the first rule of a SAR (search and rescue) is don’t become a SAR yourself. Another boat that was assisting was able to go closer to shore where a fisherman came out to meet him. There was a language barrier but the crew was able to determine that an American sailboat had run aground and that the passengers were now on shore and being attended to by the Mexican Policia. We stayed on station a while longer until we were able to verify that all occupants were safe and accounted for, then resumed our pitch-black harbor entrance; it was now one thirty in the morning.

The next day we were able to piece together some of what had happened. The boat that went aground was a US sailboat (SV Summerwind, a Newport 41) and part of our rally. There had been three people aboard, the 58-year-old owner, his 22-year-old son and a 75-year-old crewman. No one was injured, but the boat was a total loss. Initial reports indicated that they had tried to navigate by the wrong scale of chart. This has not been corroborated but based on the benign conditions at the time (other than darkness) and the fact that no mechanical difficulties had been reported, it likely was human error. It was a late night after several very rough days so fatigue may have been a causal factor. Paula and I were certainly knackered when we finally dropped anchor. I’m sure it was a devastating blow to the owner and his crew, but on the positive side, no one was injured. Boats can be replaced, but people can’t. 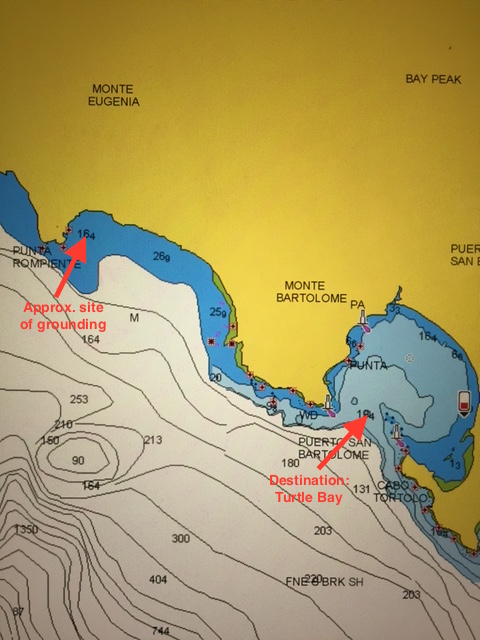