Misty Fiords National Monument is a 2.3 million acre area in SE Alaska, almost all of which is designated wilderness. It is close enough to Ketchikan to be a major tourist attraction, with floatplanes and tour boats ferrying passengers daily to take in the awe-inspiring beauty of Rudyerd Bay and Punchbowl Cove. It is a bit out of the way for most pleasure boaters but we had heard that it was well worth the added miles. One friend described it as “Yosemite filled with water.” Having seen so many incredible anchorages already in SE Alaska, we were suspect that this one may not be able to deliver the jaw-dropping beauty that description invoked. Plus, although we’re fairly social people we also like being the only boat in a secluded anchorage and this didn’t sound like it would provide that experience. Still, we needed to see for ourselves, and it was a good way to extend our time in Alaska before heading south into British Columbia.

On the 7-hour journey (we’re in a sailboat, remember), we prepared ourselves for the inevitable crowd of boats and tour operators that would certainly be in the area when we arrived. The landscape along the route was less than spectacular but we remained optimistic. We entered Punchbowl Cove late afternoon. It was just as the description depicted. The sheer, 3000-ft wall bordering the cove immediately brought to mind the powerful vision of Half Dome. We half expected to see a group of climbers bivouacked midway up, preparing to ascend the next pitch. The most amazing part, however, had nothing to do with the land features, but rather the water… We were the only boat in the cove.

The guidebook mentioned a hike to a nearby lake and we were ready to give it a go. As soon as we were comfortable with the anchor grab we hopped in the dinghy and went ashore. After four landings and exploration at various spots along the shoreline with no luck finding the trailhead, we decided to try the one last spot it may be… right beside the big

striped sign posted on a tree, the sign with a USFS sticker on it. Okay, I know what you’re thinking. Why didn’t we try there first? Well, it was a super rocky section for landing… we thought the sign was a fishing regulation sign (it was similar to others we had seen)… and, well, we’re Wagners. We never do things the easy way.

The hike to Punchbowl Lake was described as a mud and boardwalk trail with areas where scrambling is required. We took the mud part seriously and wore our XtraTuf rubber boots, the only footwear you really need in Alaska. Good thing, too. The boardwalk (more like a series of rough hewn logs covering the deeper sections of mud), while fairly well maintained by the USFS, was mossy and slick, and parts of it had been washed away in recent slides, making it necessary to climb hand over foot on the steeper sections. About halfway up there was a viewpoint with a cascading waterfall roaring over the cliff to the river below leading to the cove. The trail wove its way through temperate rain forest with enough bear scat on the path to concern even Grizzly Adams. Aside from our loud talking and random hand clapping to warn any bears of our presence – “We’ve got spirit, yes we do!” – it was quite a peaceful scene. 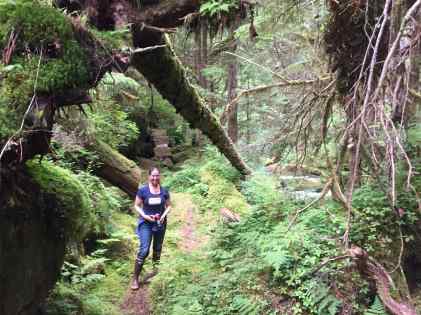 The trail ended at a USFS shelter, complete with rowboat and canoe, beside a serene mountain lake. We launched the canoe and spent the next half hour or so paddling in complete stillness and seclusion, gawking at the steep granite cliffs surrounding us, wishing we had more time to explore. 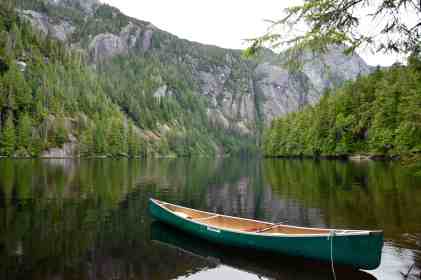 When we returned to the boat it was dusk and a light rain had begun to fall. The next morning, we heard the first floatplane overhead around 0800 and as we weighed anchor and exited the cove we passed the first tour boat. An amazing anchorage, an amazing hike, all to ourselves… we realized how lucky we were to have had the perfect Misty Fiords experience in Punchbowl Cove.

Category: Inside Passage to Alaska