Posted on December 1, 2016 By wagsandpaula

Those who know us well know that we’re fairly social people. They also know, though, that we don’t seek out large group social activities and we typically like to do things on our own program. For instance, when we wanted to snorkel with the manta rays in Hawaii, did we sign up for a tour with its easy transportation and group fun? No. We took our own snorkel gear, rented a dive buoy and light, and slipped into the dark depths of the ocean to swim around a point at night for our own adventure. And it was awesome (except for nearly being dashed on the rocks and the slight sea sickness due to the rough water). For our first foray into Mexico via sailboat, however, we decided to sign up for the annual Baja Ha-Ha rally and make the trip from San Diego to Cabo San Lucas with 530 of our closest friends (or rather, strangers).

Leaving San Diego harbor with 135 other boats was a sight to behold. As darkness fell that first night, it was a surprising sight, in fact. Most offshore overnight passages produce very few encounters with other boats. Our busiest to date had been in Oregon when we saw about 10 fishing boats throughout the night, but that was nothing compared to the number around us on the first Ha-Ha leg. Night watch required constant vigilance to avoid too close passes or worse, collisions. By the second day boats had dispersed enough that these close calls were less of a concern. The benign weather of past Ha-Ha rallies refused to appear, however, and any hope of a relaxing passage disappeared in 25-knot winds and 10-15 foot seas, making for a very uncomfortable ride and a diet of pretzels and water. Day three brought a reprieve from the rough seas in the lee of Isla Cedros before we headed through Dewey channel to round the point toward Bahia de Tortugas (Turtle Bay), the first official anchorage of the rally. Making good time and with only an hour more to go, Wags saw a flash of light and we heard the distress signal from a fellow rally boat that had run aground very near our position. Our “one more hour” became four hours as we diverted to assist with the search and rescue effort (see “Disaster!”). We finally dropped the hook in Turtle Bay and settled down in the cabin with a drink and dinner in the wee hours of the morning, thankful to have the first leg behind us and a couple of relaxing days ahead.

With the Ha-Ha fleet present, Turtle Bay was abuzz with activity. The normally tiny town with dirt streets and only a few fishing pangas in the harbor was transformed into a bustling scene: over 100 anchored boats dotted the bay; Ha-Ha participants visited each other via dinghy; pangas in their temporary roles as water taxis screamed past carrying passengers to and from the beach. In town the few restaurants were full of people eager for cervezas, tacos and wi-fi. As we wandered the streets to get a feel for the town, the elementary school let out and several children took the opportunity to practice their English with the gringos, one little boy asking if we were going to the baseball game later that afternoon. “Si!” we replied. Turtle Bay, thanks to a wealthy benefactor, has a first rate baseball field, complete with artificial turf and grandstands. Each year, the Ha-Ha rally hosts a just-for-fun baseball game. There are no teams, no score, just the requisite people covering bases and the outfield – several decide only at the last moment whether to put down their beers to shag a fly – and a LONG line of batters made up of rally participants and local residents. In the stands, people cheer on the spectacle, reserving their loudest cheers for the local kids, some of whom are, no doubt, the best players on the field. An all-day beach party and picnic the following day gave us a great chance to get to know some of our fellow cruisers. 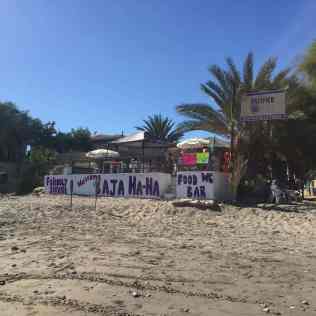 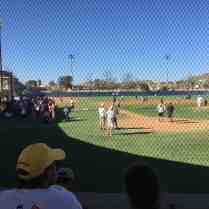 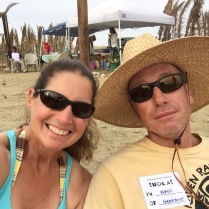 Leaving Turtle Bay, we continued south for two more days to Bahia de Santa Maria. Perfect conditions on day one yielded great sailing and our first fresh fish dinner. Lack of wind on day two forced us to motor, but the calm seas were still a welcome change from the first leg. Bahia de Santa Maria is a beautiful, remote bay. There is no town, only a smattering of small shacks used by the fishermen during the season. We spent two days there, working on our tans, doing a few boat projects and socializing – a dinghy raft-up/impromptu jam session the first night and a beach party with a live band (that traveled 12 hours to get there) the second night. The best part of Bahia de Santa Maria, though, was the surf break. The waves weren’t big but they were fun, and we were the only surfers on them. 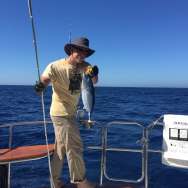 One more overnight brought us to Cabo San Lucas. We continued on for another 20 miles to Puerto los Cabos in San Jose del Cabo, a much quieter and more laid-back atmosphere than the late night party scene and rolling anchorage of Cabo. (Based on feedback from other cruisers we made the right decision.) Transportation was a challenge being so far from the immigration office and rally activities, but we quickly remedied that with a rental car. The Ha-Ha rally officially ended with two more parties and an awards ceremony. 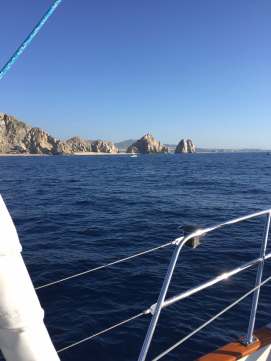 Following the rally wrap-up, most boats immediately headed to the Sea of Cortez. We opted to hang back for another week. We were in no rush and wanted to take a little extra time to enjoy the area before moving on (and to allow Wags to recover from the first food-borne illness of the trip). One day we strapped our surfboards to the top of the car and headed north. An hour and a half later, with bellies full of scrumptious shrimp tacos at non-Cabo prices, we bounced down a mile-long, rutted dirt road to Punta Pescadero and spent the afternoon surfing. Afterward, we headed to Todos Santos, one of our favorite Mexican towns, for a post-surf cerveza and snack before returning to the boat. 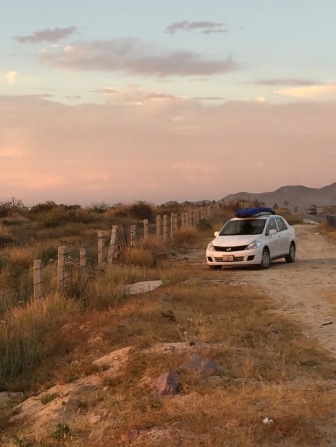 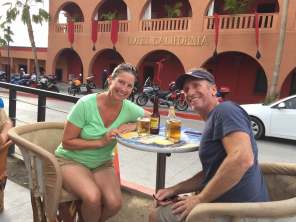 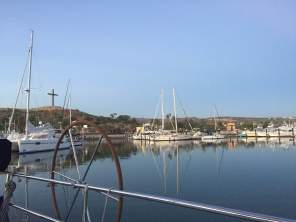 Traveling as part of the rally had its positives, including learning from the challenges faced by 135 other boats and the opportunity to meet a lot of great people we’ll cross paths with again in the future. After 10 days of crowded anchorages and large group fun, though, our social meter was pegged at overload. We were ready to get back to our own, fairly social, program.