Everyone has a plan…

“Everyone has a plan ‘till they get punched in the mouth.” – Mike Tyson

“Everyone has a plan ‘till they get struck by lightning.” – Wags

In early October, we received a message from Juanito, our boat manager, informing us, “Tengo una mala noticia,” which basically means, “I have bad news.” After several more texts and a series of mediocre Google Translate attempts, we determined that there had been a lightning strike on or around our boat and there may be some damage. Juanito’s English is marginally better than our Spanish, which is to say, less than conversational grade, so we weren’t able to get a detailed account from afar. We knew there were a few lights inside the boat that wouldn’t work and, unfortunately, a few lives lost, as evidenced by the picture Juanito provided of the three dead birds that were found on our deck. So, after an amazing summer in the Pacific Northwest, we arrived back in Puerto Vallarta late last month with hopes of finding only minimal damage and being able to stick to our plan of an early November departure. Those hopes made it only as far as the 15-minute taxi ride from the airport to the marina.

The bright side was, Gadabout was afloat and there were no external signs of damage, to the hull or deck. The (now quite crispy) dead birds were still there, lying side-by-side on the dock, left as proof, we assume, that the photo sent to us was real. We entered the sweltering cabin and immediately turned on the air conditioning, except that it didn’t start. The air conditioning was fried. This was going to be less than fun. Over the next several days, in 95 degrees and 80% humidity, we worked our way through all the systems onboard to find that the damage from the lightning, which was, in fact, a direct strike to our mast, was extensive. It destroyed everything on the mast (wind indicator, VHF antenna, anchor and navigation lights, and radar) and all of our navigation electronics inside, as well as the AC, inverter, and fridge and freezer controllers. 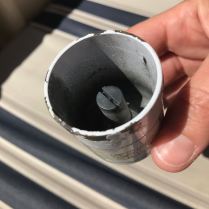 After five days of staying on the boat with no AC and no refrigeration, we threw in the towel and booked a week in a nearby condo. Sure, we could’ve powered through, but we decided our sanity was worth the cost. Besides, there was a washer/dryer at the condo, so that would offset the cost of having to go the Laundromat at least a few times – Wagner logic, at its best.

Three weeks later, things are progressing. We’re back on the boat, the AC is fixed, we’ve installed a new inverter and the batteries are fully charged. We had a spare refrigeration controller onboard and were able to source another quickly, so the fridge and freezer are back in service. New electronics are ordered and installation is underway. 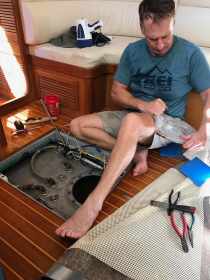 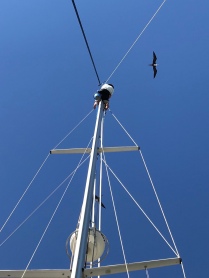 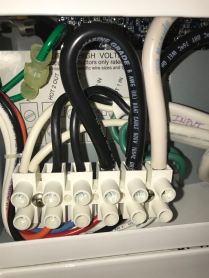 Best of all, our insurance company, Markel (a division of USAA), has been wonderful and is covering everything (minus our deductible, of course)! We’re pretty sure the dead bird photo was the tipping point for them – it was one of the photos we sent them to show that the damage was indicative of a lightning strike.

We’ll be in Puerto Vallarta much longer than we anticipated but we can see a light at the end of the tunnel and we’ll come out of this better than before. Plus, we have the opportunity to spend time with friends – some from last season and some new. It took a little time but we now see the silver lining in this cloud. Let’s just hope there’s no more lightning!

2 Comments on “Everyone has a plan…”