All I wanted was a glass of water…

The day started out innocently enough…breakfast, coffee, listen to the morning radio net, then it was time to make some more water. Onboard Gadabout we have a reverse osmosis water maker that allows us to turn seawater into drinkable water at about twenty gallons per hour and only millions of dollars per glass. In order to do this we must run the generator. That should be easy enough; it was just running while we made coffee and toast. (Editors note: for any of you who are following along super closely you might ask, “But wait, I thought they had a DC water maker and didn’t even have to use the generator. As a matter of fact, he even bragged about it!” Well, that’s another story for another time, suffice it to say we like spending MANY thousands of dollars to make water, instead of just SOME thousands of dollars.)

So, start the generator I did, and within a few minutes Paula commented that she smelled something burning. I responded with my preformatted answer “all generators do that, honey…” while quickly turning it off and trying to locate the origin of the odor. All the diesel stuff on a boat uses ocean water to circulate around a heat exchanger to help cool the motor. After starting a marine diesel engine, one should always, ALWAYS, check to see that the water is being expelled from the exhaust. This means that the pump is working. I mean, this is basic Cruising 101 stuff here, guys, any idiot knows to check the exhaust. Well the one time (ok, maybe second) I didn’t go up and check, Neptune and Murphy decided to team up.

Upon gaining access to the generator and opening the pump housing it was readily apparent that the impeller had failed. Impellers are rubber paddle wheels that are somewhat vindictive and like to choose the most inopportune times to fail, usually by shedding rubber parts deep into the heat exchanger. Check. Ours did that, right on schedule. Now, instead of simply changing out the impeller, we (Paula was now fully involved) had to start taking off rubber hoses that are so difficult to remove that it makes you wonder if they started with the hoses and built the motor around them, and start fishing for rubber pieces all the way to the heat exchanger.

One hose was removed by destruction due to a combination of its intransigence and my frustration…and, of course, it’s the one size of hose for which we do not have a spare. So, leaving Paula on impeller replacement/shrapnel recovery duty, I dinghied to shore, grabbed a cab and was off to find a hose guy. You see, in Mexico, there is seldom one-stop shopping. If you need screws you go to the screw guy (Casa de Tornillos, in our case). If you need hose, you go to the hose guy. But wait, hose guy doesn’t carry clamps. You need to go to the clamp guy for that. You get the picture. These stores are seldom anywhere near each other, so every parts trip becomes an adventure in expanding our Spanish vocabulary with words seldom used in conversational society.

I will spare the build up and suspense, but as we (the cabbie and I) got turned away at tienda after tienda (this one sells hydraulic hoses, but not your kind…this one sells water hoses…) we worked further into a labyrinth of back alley repair shops where they found it less and less amusing that a gringo in a collared shirt would be darkening their doorstep. The guy at the final shop where I managed to purchase my hose looked straight up like a caricature of every bad hombre Mexican stereotype Hollywood has ever portrayed. He even spat on the floor when I walked up, for effect. But, after a few minutes of searching and a joke about gringos that I didn’t fully comprehend but made even my cabbie visibly uncomfortable, we were on our way back to the boat.

By the time I got back Paula had found all the pieces and installed the spare impeller, so I simply had to cut the hose to size, lacerate my hand, re-do the hose after it leaked the first time, and bingo-bango, we were making water, only ten hours after I began. And a mere hour later, I had that glass of water! 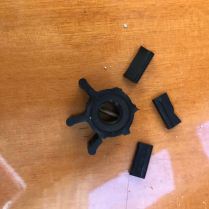 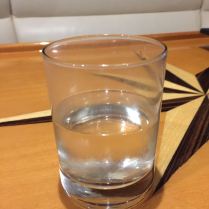 3 Comments on “All I wanted was a glass of water…”