The Galapagos Islands are an amazing anachronism of nature. Visiting these Islands is like going back in time. We will spare you the history lesson, suffice it to say that since the islands’ discovery by the Spanish in the 1500s, subsequent occupation by pirates and privateers, and ultimately Charles Darwin’s visit, which led to ground breaking theories on the evolution of species, all who have visited have known them to be extraordinarily unique. Home to countless endemic species, many of which have endured near extinction at the hands of man, the flora and fauna remain largely unchanged from the initial discoveries and amazingly, almost all wildlife shows little interest in or fear of man.

As we previously reported, getting here is no small feat. It requires either a demanding boat journey or an expensive air ticket, which has probably been one factor in helping keep the islands pristine. Another is the government of Ecuador. They realized early on how important and unique this ecosystem is, and as tourism and interest in the islands have grown, the government instituted measures to ensure the survival of these delicate lands. These measures come in the form of high entry costs and limited access (unless with a park guide). This chuffs many cruisers as they are used to being able to toss out the anchor at any secluded cove (usually for free) and being able to take it all in on their own. In the Galapagos cruisers are restricted to just one anchorage on each of three islands: Isla San Cristobal, Isla Santa Cruz and Isla Isabela. While we would loved to have anchored in secluded coves ourselves, we understand the restrictions and found that locating our boat in a primary harbor on each island afforded us a nice home base from which to explore.

Costs are another factor for cruisers. “How much?” you ask. For Gadabout, with three crew aboard, it cost us about $2000 USD. Those costs included: mandatory park fees ($100 pp), customs/immigration, fumigation, port fees, and agent costs. We have often heard the refrain that it would be cheaper to fly to the Galapagos and go on a tour, but when you put pencil to paper that doesn’t work out. Airfare from Quito, Ecuador alone is around $700 pp and most cruise tours run somewhere between $500-$1000 per day. Although many of those cruises do get to visit locations inaccessible to sailboats, it seems they view the same wildlife that we were able to see mostly for free (excluding previous costs, of course). We watched many of the cruise passengers come ashore and it was a little more of the organized tour group scene than we prefer. We enjoy seeing, visiting and discovering at our own pace. However, if you are an avid scuba diver then one of the cruises makes perfect sense as they visit tons of inaccessible and unique dive sites.

It is true that to visit many areas you must have a guide, and those guides are a part of any organized tour that you book, but we also found that every island has plenty of opportunities to explore and interact with the wildlife on our own—it is everywhere! Furthermore, each island has its own personality and varieties of wildlife.

The first island we visited, where we made landfall and checked in, was Isla San Cristobal (Puerto Baquerizo Moreno, AKA Wreck Bay). Tom’s wife, Ginny, joined us here, as well. 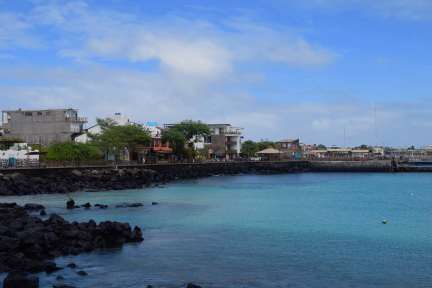 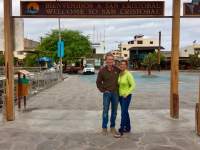 The word in the guidebooks was that the sea lions run the town and the humans are the visitors. This is pretty much true! Contrary to places like the west coast of the US, the relationship here between sea lions and people is quite amicable. The sea lions aren’t quite as large and definitely not as territorial. It is not unusual at all to have to step over them on a path or have them come up to you while swimming to see what’s up. 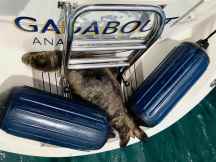 The town had a great eclectic vibe with plenty of restaurants and a good balance of locals and tourists. 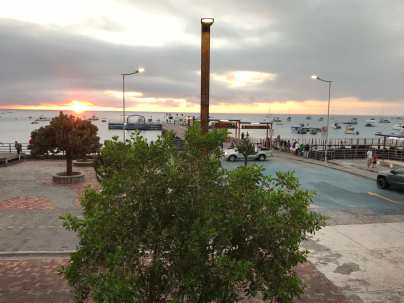 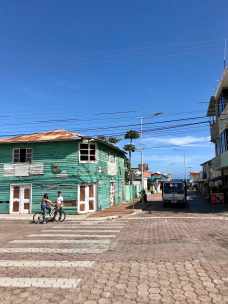 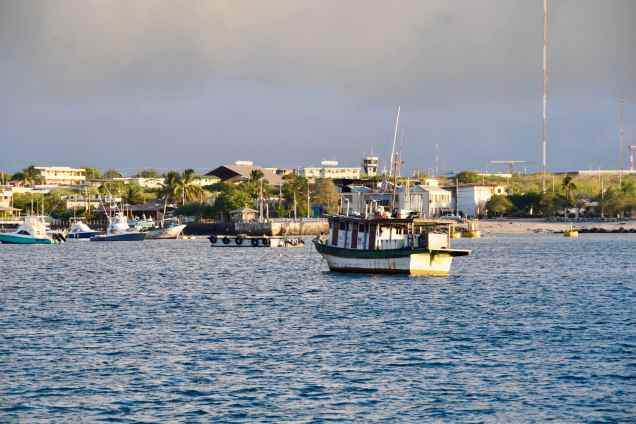 Here we met our primary agent (Bolivar Pesantes) who was a wonderful man. We spent an entire day on an island tour with him and after it was all through he gifted us with fresh Galapagos coffee, eight lobsters, and a HUGE stalk of bananas. We tipped generously.

It was on this tour we visited a high volcano caldera lake where frigate birds visit to rinse the salt off their wings, a family coffee plantation and our first tortoise sanctuary (there would be many more). 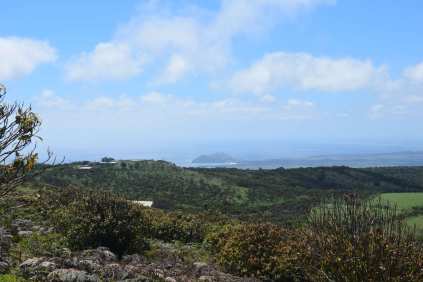 A blustery 50-mile day sail brought us to Isla Santa Cruz. This island is the main hub for the Galapagos, where all the tourists fly in and meet their cruise vessels, and the feel was much different. The town was nice enough with a lot of (tourist priced) restaurants and decent provisioning for us but the locals were more cursory and less open, no doubt a function of the endless stream of nameless, faceless tourists who spend a few hours wandering through town before being whisked away by their tour guides. 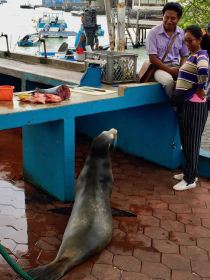 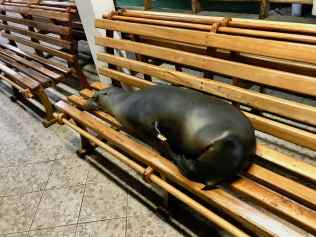 While the town was nice…the anchorage was HORRIBLE. The harbor is open to the sea and the predominant swell. All boats (even the catamarans) rocked violently at anchor and it was all you could do to get a decent night’s rest. We spent three days here and visited the Darwin Research Station, a wonderful free-range tortoise area in the rainy volcano highlands, and an interesting beach/lagoon where we swam with white tipped reef sharks and began to see many of the dark marine iguanas.

We spent two weeks at Isla Isabela, the least populated/visited of the three main islands, and really enjoyed the opportunity to slow down, decompress and get into the rhythm of the Galapagos. The town is simple and quaint with dirt streets and many restaurants serving local cuisine. 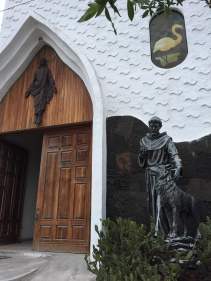 The island itself is best known for its Galapagos Penguins (the only Penguin species that lives near the equator), many marine iguanas, giant land tortoises (of course), and pink flamingos!

There was a beautiful walking path just outside of town that meandered through an estuary and we took any chance we could to visit and ogle at the beautiful pink flamingos residing there. Seeing them in flight was amazing! They aren’t the most graceful during takeoff or landing, but when their wings are spread they are huge with a distinctive black stripe contrasting the vibrant pink on the backs of their wings.

We also took a snorkel tour where we swam with giant sea turtles, small sharks, sea snakes, rays, and even sea horses. The tour also visited an amazing area called “Los Tuneles” where old lava tunnels were filled with seawater and you could snorkel through them and between an amazing maze of volcanic spires and arches. An added bonus was the exhilarating boat ride through large breaking waves to get to the area. Fortunately, our boat captain, Leonardo (AKA “Galapagos John Travolta” because of his resemblance to the actor), was an extremely skilled and knowledgeable pilot. 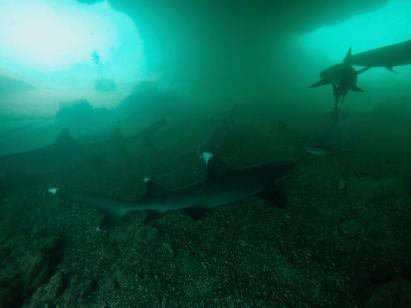 We bid adieu to Tom and Ginny and spent the rest of our time on the island exploring, relaxing and doing boat projects in preparation for our passage to the Marquesas. One day we rented bikes and took a ride up some punchy hills to visit the remains of an old prison camp that operated from 1946-1959, where prisoners were forced to stack rocks into a giant wall in the middle of nowhere (“The Wall of Tears”) for no other reason than punishment. On the way we passed a tortoise the size of a boulder leisurely crossing the road…no big deal. 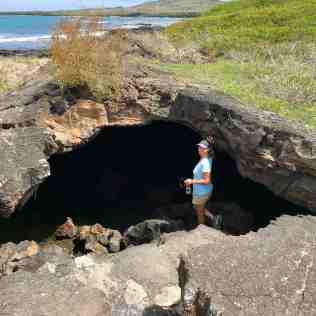 Each day when we would dinghy ashore we would motor past the penguin colony and slow to watch their hilarious waddle/walk/hop way of getting around. At the dock cheeky young sea lions were everywhere. They interacted with each other like dogs, playing keep away with a stick, or just wrestling in the water. At night when we returned to the boat the sea lions would jump just ahead of us, chasing our spot light and the needlefish it stirred up. Some nights we would drop the underwater light over the side and watch as small sharks and sea lions circled around the beam feasting on small fish. From the day of our arrival to our last day in the Galapagos we never ceased to be amazed and entertained by the abundant wildlife around us, unconcerned with our presence. We are so glad we took the time and effort to sail to these unique islands, and Isla Isabela was a perfect last stop to recharge before we made the giant leap across the Pacific. 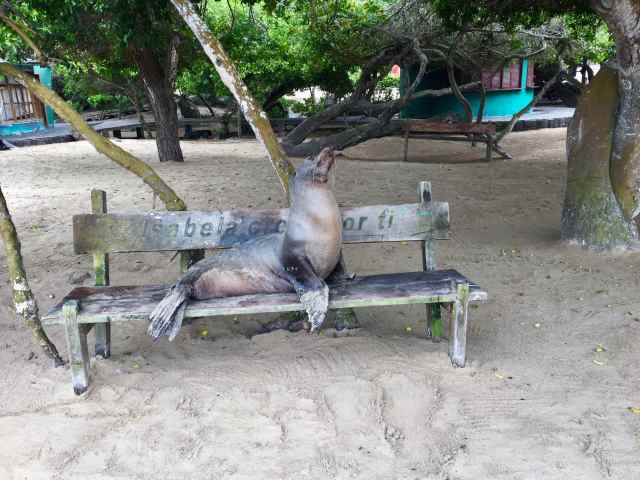 6 Comments on “Back in Time”