From my seat in the cockpit, I glanced up frequently to admire the towering, verdant green hills ringing the bay in which Gadabout was anchored. Coconut palms near the water’s edge were replaced by hardwoods upslope and rolling blankets of grass in the highlands where goats and cows roamed freely. The hilltops were shrouded in clouds delivering their daily dose of moisture. We were still dry on the boat but would likely get a fresh water rinse soon. We had been in the Marquesas Islands for three weeks; it seemed like more. We were in Baie du Controleur on the island of Nuku Hiva where we’d spent the last four nights waiting out a strong easterly before we could continue to the north side of the island. We tried to leave the previous day. The seas were big and angry, however, so we retreated back into the protection of the bay. There were certainly worse places to wait. Though the water in the bay was very murky and not at all appealing for a dip, the surrounding area was beautiful. At the head of the bay lay a lush valley made famous by Herman Melville in his book, Typee. On one side of the bay there was a river, accessible at high tide through a narrow cut between the rocky shore and a sandy peninsula. One day we took the dinghy through to explore. Spotted rays darted about in the shallow water of the lagoon inside. A half mile up the river we tied the dinghy to a concrete quay at the edge of the village of Taipivai. 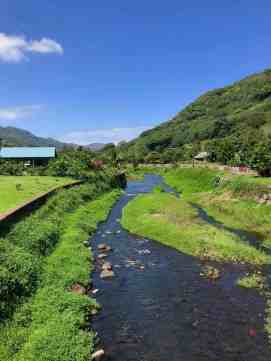 The only downside was the biting no-nos that feasted on us at every turn. We happened upon a craft market in a small building at the edge of town, which we assume was set up for a visiting tour group, although we saw no evidence of its impending arrival. After purchasing a pair of earrings and a wooden carving of a manta ray we headed back to grab a few provisions at the local store we had poked in earlier. As we reached the main road, a woman waved to us and asked if we would like some fruit. “Oui, merci!” we quickly replied. She and her husband proceeded to load us up with so much fruit from their trees – pamplemousse, star fruit, mangos, limes, passion fruit – we were good for weeks. When we asked what we could give them in return, they smiled and, pointing at the trees, said, “Nothing. We have plenty!” We chatted with them in broken French and English for a few minutes (we found out they love Las Vegas and have a friend there who is a French professor), thanked them again for their generosity and went on our way, 10 lbs. heavier. 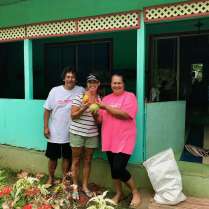 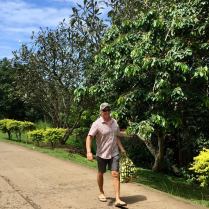 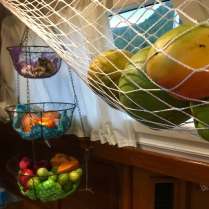 Of the places we’ve visited in the Marquesas, this was one of our favorites, not because of the fruit (although, it was good!) but rather because it gave us a taste of what we call Aloha, Marquesan style.