Hiding Out and Slowing Down in the Tuamotus

We awake within seconds of one another, suddenly aware of the rain pouring in the hatch above our heads. Time for the rain dance! I jump up to close our cabin hatch then make my way to the salon to secure the windows there as Wags runs to shut the forward hatches. All in all, it takes less than a minute but that’s plenty of time to soak a few parts of the interior. Two minutes later we’re settled back in bed as the rain stops.

This has been our routine for the past several nights as we wait out a frontal system moving through the Tuamotus, an archipelago in French Polynesia made up of 76 atolls. We are holed up in a beautiful SE anchorage, called Hirifa, inside the lagoon of the atoll of Fakarava, partly sheltered from the 25-30 kt winds and nicely protected from the 15-foot swell in the open ocean outside the atoll.

There are 20 boats here, all doing the same thing. It’s a festive atmosphere with dinghies buzzing around the anchorage, kite boarders enjoying the strong winds, and snorkelers exploring the abundant marine life on the small clumps of reef, known as “bombies,” scattered throughout the clear water of the anchorage.

Cruisers gather in the evenings on each other’s boats for potluck dinners, drinks and conversation, swapping stories and plans. We failed to take a single picture of the anchorage itself but we did snap one of these cute piglets we encountered on a walk through the coconut grove. 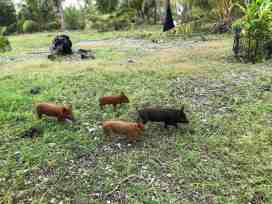 Fakarava is the third atoll we’ve visited. Each atoll has a fringing reef surrounding a lagoon. Most have a single pass through which to enter, although some have more than one and some have no way of entering the lagoon. Entering the passes can be a smooth process if you time your entry for slack tide or a hair-raising experience if you try entering with strong wind or current against you. We’ve been lucky. With the exception of a slightly sporty exit from one atoll our timing has been sufficient to keep our adrenaline levels in check.

Each atoll also has a different vibe. Our first was Raroia, where we arrived after a pleasant (for once) 3-day passage from the Marquesas Islands with a feathered visitor along for the last part of the ride. We anchored in calm, clear waters in front of the village. 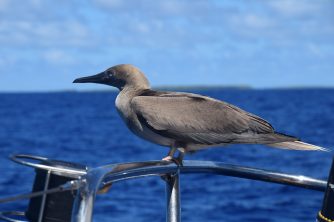 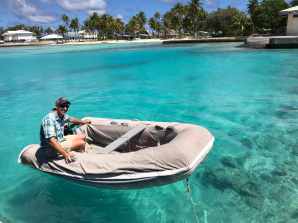 Raroia is less popular than some of the atolls, mainly because of its more remote eastern location in the archipelago. There were a few other boats there when we arrived but by our last night we were the only boat in the anchorage. We spent our time exploring the village and snorkeling. There are just 200 people on the atoll so it doesn’t take long to explore but the village has a wonderful laid-back feel, the residents are very friendly and the main mode of transportation is bicycle. The sunsets aren’t bad, either. 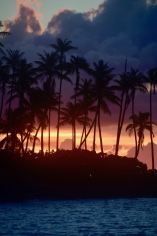 There is a beautiful blue lagoon a short stroll from the village. The lack of shade makes cooling off in the clear water a treat. 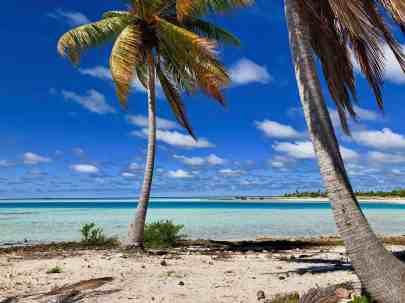 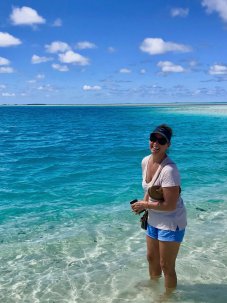 One day we took the dinghy to the pass and drift snorkeled on the incoming tide. For this we drove the dinghy to the outside edge of the pass, tied ourselves to it with long ropes and jumped in. As the current carried us back inside the pass the sensation was like flying as we effortlessly glided over the coral, fish and sharks below. It was so cool we did it four times.

Our next stop was the atoll of Kauehi. The pass is at the south end of the island and is an easy entry, especially when timed at slack tide. There’s a small village at the north end of the island but we chose instead to spend our time in an anchorage in the SE corner of the atoll. We had read that this anchorage is the epitome of visions of the South Pacific so our expectations were high. We were not disappointed. We anchored in 25 feet, watching our anchor the entire way to the sea floor. There were three other boats in the anchorage, two of which were friends. That evening we all met up on the beach and cooked dinner over a fire of coconut husks. The next day, everyone went their separate ways and we were left as the sole inhabitant of this gorgeous corner of the world. 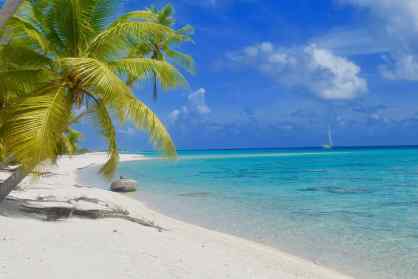 We spent the day exploring ashore and snorkeling the crystal clear water of the reef, watching black-tip reef sharks and dozens of species of colorful reef fish go about their daily lives. 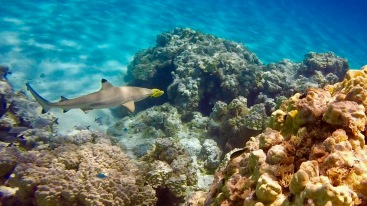 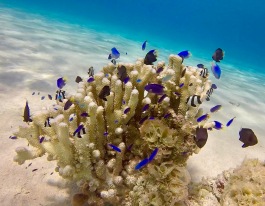 We could’ve stayed longer but the aforementioned blow was approaching so we left the next day for Fakarava.

On Fakarava, aside from our time in Hirifa, we spent several days anchored off the village of Rotoava in the NE corner of the atoll. We loved our time there. The village, while small, is a hub of activity with several restaurants, markets and dive shops. It didn’t take us long to find our favorite establishments. Fakarava Yacht Services, run by Aldric and Stephanie, is a godsend to cruisers needing internet, sail repairs or laundry service. It’s a great place to meet fellow cruisers and you can find half the anchorage there on any given afternoon. There’s also bike rental available, which we took advantage of for a little out of town exploration. 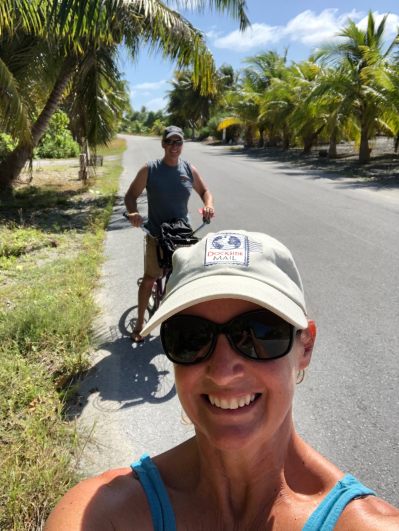 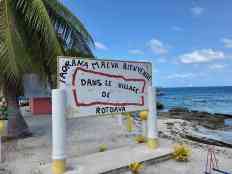 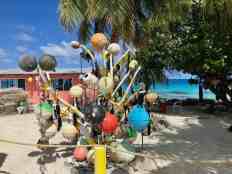 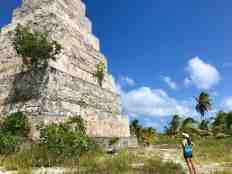 The rest of our favorites were, of course, focused on food. The local boulangerie (bakery) kept us stocked up on fresh baguettes and pain de chocolate (yum!), which we were always sure to order a day in advance and pick up first thing the next morning. We loved the paninis and off-the-hook ice cream sundaes at La Paillote, plus the owners’ dogs, who provided much entertainment. And we couldn’t get enough of the delicious poisson cru du coco (raw fish in coconut milk) at Rotoava Grill, where we ate enough times for the waiter to recognize us. 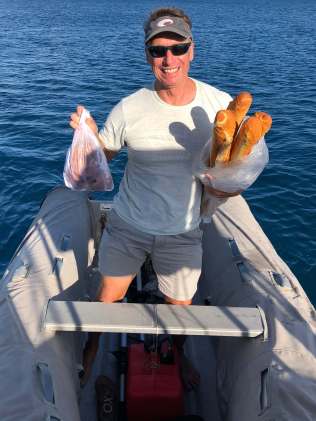 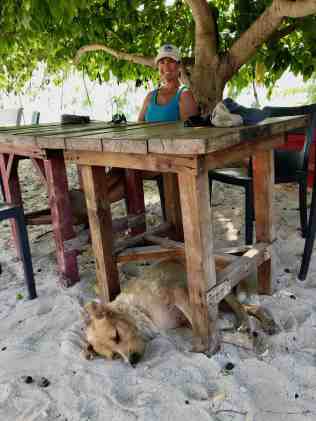 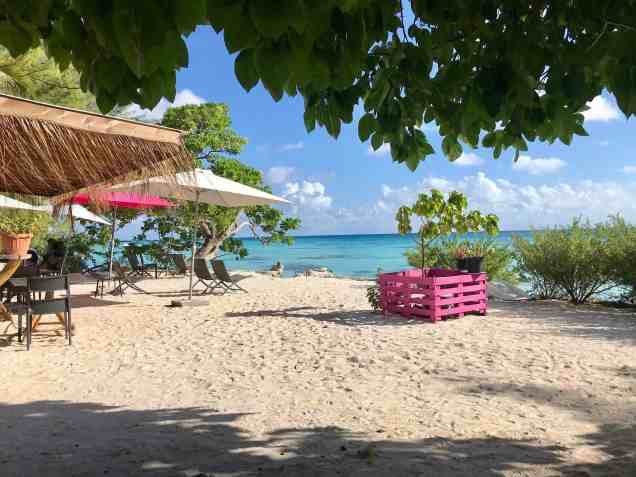 As much as we loved the food, however, we had to move on.

Saturday morning we caught the slack tide and cruised through the pass under sail, headed for our next atoll, Toau, 37 miles away. While there is a pass with anchorage areas inside the atoll, the more popular option is to visit Anse Amyot on the NW side of the atoll. The short pass here is a “false” pass in that it provides access through an outer reef to a small anchorage area but not inside the atoll lagoon, which is blocked by a larger reef. Gaston and Valentine, a local couple, are the sole inhabitants of this location and they maintain eight mooring balls for cruisers to use. The sea floor is littered with coral here so using the moorings not only saves one from getting an anchor chain wrapped around a bombie but it also prevents damage to the coral. We picked up a mooring ball and settled in, quickly jumping over the side to have a look at the nearby reef, an easy swim from the boat. If there was one place we wish we could’ve stayed longer in the Tuamotus, this quickly became it. 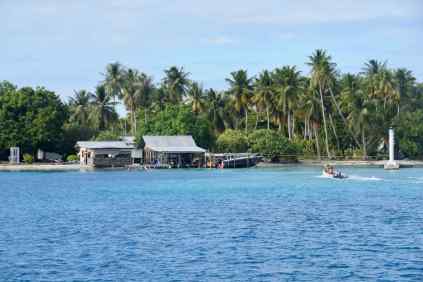 Toau is part of the Fakarava UNESCO Biosphere Reserve (as is Kauehi and Fakarava), and we had heard that the snorkeling and diving here was excellent. After our first snorkel, we were convinced. After our second and third, it took the prize for top snorkeling destination we’ve ever visited – the healthy coral, abundance and variety of reef fish, sharks, monster moray eels, and tiny seahorses were extraordinary. Getting to snorkel through a huge ball of bait fish right in the anchorage was the cherry on top! 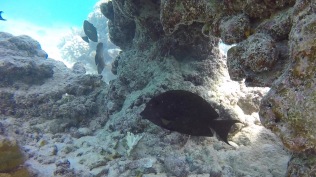 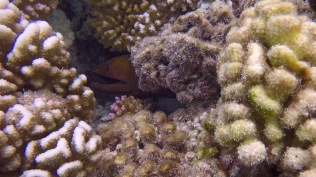 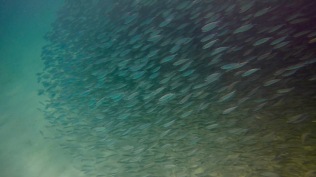 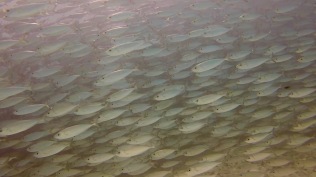 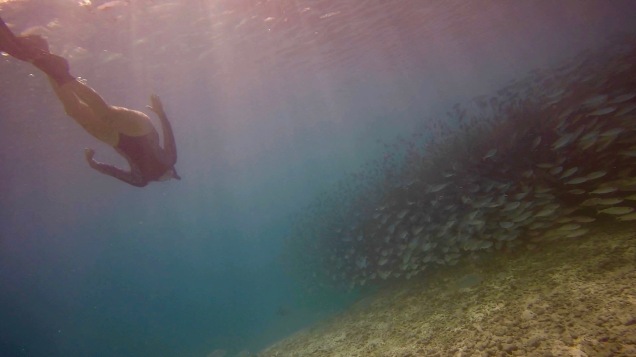 Gaston and Valentine also run Pension Matariva, owned by Valentine’s sister, who lives on Fakarava, so if you want to check out this slice of paradise, just hop a flight to Tahiti, then a puddle jumper to Fakarava and a speedboat to Toau. You won’t be sorry! 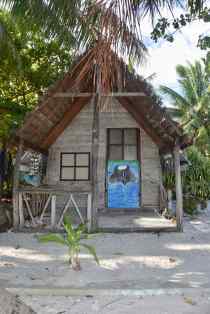 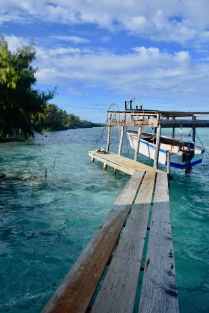 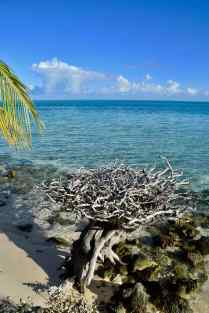 Our time in the Tuamotus was much too short, but with only a 90-day visa for French Polynesia we have to keep moving.  Next stop, Tahiti and the Society Islands.

5 Comments on “Hiding Out and Slowing Down in the Tuamotus”