We could see them circling around even before we had the dinghy anchored. They were everywhere, and they were hungry….

Our day began with an intent to snorkel with stingrays and sharks.  We’ve seen a lot of rays and sharks (mostly black tips, which are indifferent towards humans) on our dives, but the word we had received said that there was a place on the island of Moorea in French Polynesia where you could swim up close and personal with stingrays and they had no fear or aggression towards humans.  We were in!

Before we go any further, let’s dispel some myths about stingrays.  They look like evil fighter ships cruising along the sea floor with menacing arched eyebrows and slowly flapping “wings” that give them a fluid, flying-like motion. They are actually benign bottom feeders who have received a bad rap because their one defense mechanism is a surgically sharp barb on the tail which they will wield with impunity if stepped on or generally harassed. Yes, a stingray killed Steve Irwin (“The Crocodile Hunter”) but this was a rarity and mainly due to the fact that he surprised it from behind.  The stingray lashed out in self-defense in the only manner it knew—wildly stabbing its barbed tail.  The power and sharpness of that tail severed Mr. Irwin’s sternum and sliced his heart.  Gruesome, I know. But this is an extremely uncommon example (although I do NOT recommend Googling “stingray injuries” unless you have a strong stomach). Stingrays will not come after a diver and are not known to be in the least bit overtly aggressive.  “Live and let live” seems to be their motto.

But there is this place… Upon further investigation, it turned out that this is a location where local tour guides have been feeding the rays for years, much to tourists’ amusement.  The rays are so accustomed to human interaction (and being fed) that they will swim all around you and have no need to use their defense mechanism.  It sounded fun but we couldn’t help feeling a nagging doubt deep inside, not regarding our safety, we were all in on that front, but regarding what effect it has on the animals.  A bit of online research found that the practice of feeding animals such as this can have long-term negative consequences as it alters their natural behaviors, potentially affecting their ability to forage as they normally would. It turns out that stingray feeding occurs in many resort areas from the Caribbean to French Polynesia, however most fish and wildlife departments are beginning to crack down on the practice for this very reason. So, it was with this knowledge in mind that we decided to still do the snorkel trip but not with a tour operator. We would do the trip on our own, absolutely not bring any food and endeavor to let them get as close as they wanted on their own terms.

Our trip to the location was a straightforward two-mile dinghy ride weaving among the coral heads inside Moorea’s fringing reef. About a quarter of the way there, however, we found ourselves surrounded by hundreds of boats, some filled with teams in jerseys and most with spectators.  It turned out that this was the beginning of an around the island outrigger canoe race. We arrived just about the time the starting horn blew and found ourselves in the middle of a raucous, colorful boat parade as the mass moved in the same direction as us toward the racers’ first checkpoint.  It was quite fun and festive as we motored along, at times with outrigger paddlers surfing the wake behind Engelbert (our dinghy). 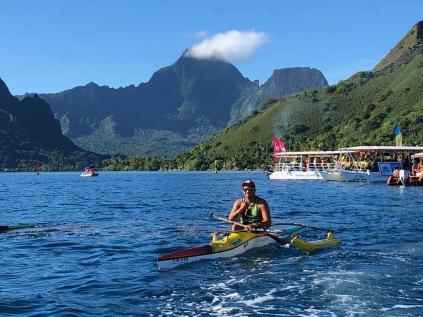 As we neared our snorkeling destination, we veered off the parade route and set the anchor in five feet of turquoise water over a sandy bottom. Before we were even able to put on our gear we could see the large dark shadows approaching from all directions. Apparently, their Pavlovian response is quite strong and the sound of an idling outboard motor is akin to ringing a bell for one of Pavlov’s dogs.  I slipped into the water and was immediately attacked… er, more like hugged.  A large stingray swam right up my chest looking for num-nums and, finding none, continued quickly on his way.  Numerous others swam close by but none were as bold as that first guy.  We settled into a rhythm of swimming along, tapping each other on the side and pointing excitedly each time another ray snuck up on us.  We were closer than we have ever been to stingrays, often being brushed by their smooth wings as they flapped past.  It was quite exhilarating. 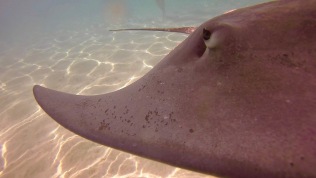 They would swim past, hoping for a handout, and when none was scented, continue along. They did seem to have short memories though and it dawned on us that we were frequently seeing a few repeat visitors.  In the background numerous blacktip sharks swam at a respectful distance hoping for scraps that never came, although it was a bit disconcerting to have up to six at a time circling us in hopes of a tasty lunch.

It was a one-of-a-kind experience, tailor made for Instagram but we definitely left conflicted. On one hand, it expanded our understanding of these creatures and their docile nature, but on the other hand, at what cost? At the end of the day we did what we always do. We tried to experience nature without unduly influencing it, taking only pictures and leaving only footprints finprints.

2 Comments on “Attacked by Stingrays!”